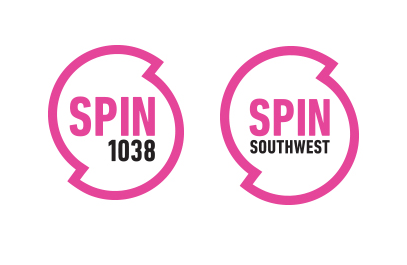 SPIN1038 and SPIN South West has announced plans to increase its shared programming between SPIN South West and SPIN1038 in Dublin. The move will bolster the youth radio portfolio across both regions by bringing together the strength of a national network approach with the best of local content.

The hugely popular Breakfast and Drive-time shows on both stations will be retained while mid-morning and evenings will become shared across both regions, delivering increasingly relevant and engaging content for youth audiences. Localised news, sport weather and travel will be retained all day, every-day, on each station.

SPIN South West boasts the highest market share for 15-34-year olds in the South West region, commanding almost 31% of that demographic, while SPIN1038 attracts 23% of the same demographic in the Dublin region.

Keith Wood, Chairman of SPIN South West: “In a rapidly changing media landscape, our ambition to provide programming relevant to our audience, is more important than ever. Increasing our shared output allows us to continue providing the best local content, while introducing the biggest music shows to a wider youth audience. This is a great addition that will further complement our recently launched SPIN Xtra digital radio station and improved SPIN Apps. The bringing together of key talent and resources will strengthen our FM and Digital output, allowing us to meet the growing demands of the youth audience.”

The new shared schedule, across the Spin South West Region and Spin1038 Dublin region will be:

SPIN Hits with Peter (11am-3pm): Hosted by Peter Collins, who will be no stranger to the South West audience having started his radio career there, brings 4 hours of the freshest music plus a ‘no repeat workday’.

The Zoo Crew (7-10pm): Currently the biggest evening show in Dublin, The Zoo Crew with Jaz Keane and Laura Bracken, promises the hottest tunes and biggest celebrity stories every weeknight.

Further shared schedule will be announced for weekends on SPIN.