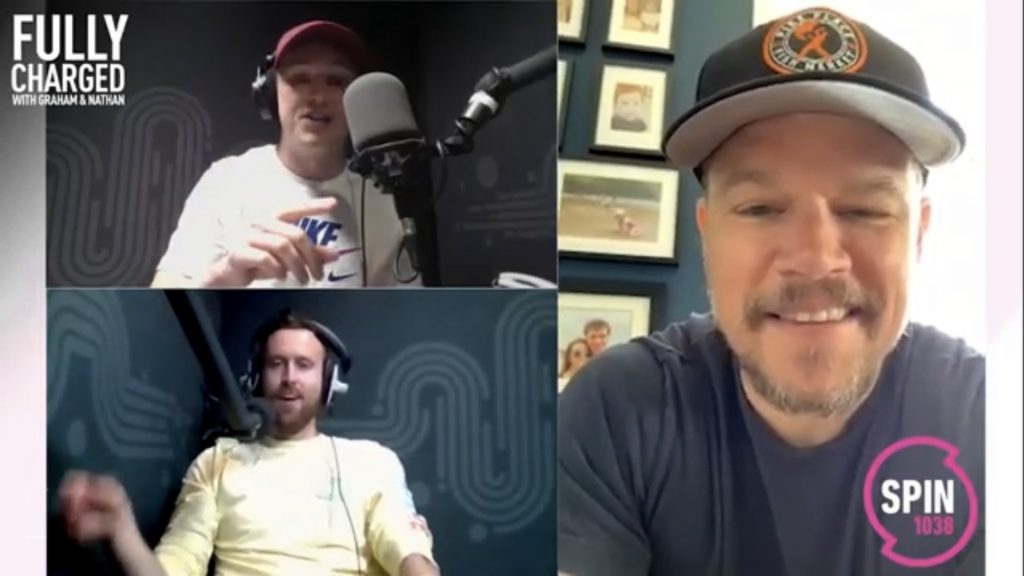 Dublin Youth Station, SPIN 1038 hit the jackpot this week when Breakfast show ‘Fully Charged with Graham and Nathan’ announced a World Exclusive interview with Matt Damon, the real Matt Damon! The interview was broadcast in full this morning on SPIN’s ‘Fully Charged’.

SPIN 1038 Breakfast hosts, Graham O’Toole and Nathan O’Reilly recorded a lengthy interview with the ‘Contagion’ star via Zoom where he spoke about his daughter’s positive COVID-19 diagnosis, life in Dalkey, *that* picture with the SuperValu bag, Leo Varadkar returning to the frontline and how Bono told him over Facetime that a local radio station was trying to track him down!

Nathan O’Reilly, one half of the breakfast show duo has been tirelessly campaigning for Matt Damon to come on the show for the past number of weeks, after discovering he was living in lockdown in Dublin.  Matt revealed that he’d become aware of the radio station’s quest to talk to him and the lengths Nathan had gone to.

ON HOW THIS INTERVIEW CAME ABOUT:

Matt admitted: “It’s kind of my fault, I heard you guys on the radio like a month ago. I shouldn’t have put you through all of this, because honestly I was in the car with my kids and I heard you guys talking about all this stuff, you guys gave the number to call in and I was trying to memorise the number…finally my wife said to me yesterday, have you called that radio show? You’re such an idiot, just look up their number”

But it wasn’t just Matt’s wife who urged him to get in touch with ‘Fully Charged’, Bono also played a part: “He (Bono) said to me last week ‘you know there’s a local radio station that’s looking for you and so that was the final impetus for me, I was like I really got to track those guys down. I mean if he’s heard about it”

As part of the plight to find Matt, Nathan joined a Dalkey Facebook group but was kicked out shortly afterwards. Matt had been made aware of the story by locals: “I know, I heard this story, laughed so hard and that’s when I realised how great this place was, and how protective everybody here is. You joined the group for one day before they found you out and booted you out, which is great!”

ON HOW HE ENDED UP IN IRELAND AT THIS TIME:

“Time is so weird in this whole pandemic; it was before the lockdown. I’m in the middle of a movie…we shot the first half in France and we were moving to Ireland, and right when we arrived in Ireland the movie was shut down… so that would have been early March, I guess, like 2 months ago.”.

ON HIS DAUGHTER TESTING POSITIVE FOR COVID-19

Nathan: Is any friends and family back home in America, are they safe? Everything OK there?

Matt Damon: “Our oldest daughter is in college, obviously that’s been shut down. She’s in New York city and she had COVID really early on along with her roommates and got through it fine so I shouldn’t say our whole family is together, of our 4 kids we’ve got the 3 younger ones and our oldest one, we’ll reunite with her at the end of the month.. But everybody’s OK. Obviously for Lucie’s (Matt’s wife) Mom and my Mom it’s scary for that generation. I think we’ve all got the message now, everybody’s doing the isolation and the social distancing and hand washing, everything we can to mitigate this, We’re going to go back to Los Angeles and she’s (Matt’s eldest daughter) going to come out so we’ll all be together and figure out what the heck we’re going to do. It’s such an odd limbo that we’re all in”

ON LOCKDOWN LIFE IN DALKEY:

“This is one of the most beautiful places we’ve ever been.  I’m with my whole family, I’ve got my kids, and we have teachers with us because we were planning on missing school for about 8 weeks, so we’ve got what nobody else has which is actual live human beings teaching our kids, the schools are all shut down back home and all the kids are doing remote learning. So we feel guilty, we’ve got this kind of incredible set up in this place, it’s just absolutely gorgeous. Even in the lockdown, they’re like you’ve gotta stay within 2 kilometres of your house, I mean 2 kilometres of here there’s tress and forests and woods and oceans, I can’t think of any place else you’d rather want to be in a 2 kilometre radius of”

ON LEO VARADKAR WORKING ON THE FRONTLINE:

“You’ve got a president who just goes to the hospital and starts working, I mean what a badass, it’s just on another level”

ON HOW LONG HE’S PLANNING ON STAYING IN IRELAND:

“Look, we’re staying. We were supposed to leave last week because the movie was meant to be done by now but we’re staying ‘til the end of the kids’ school year just because it’s so peaceful here and everybody’s handling it so well. You walk down the street, everybody’s minding all the guidelines”

ON *THAT* PICTURE OF MATT SPORTING A SUPERVALU BAG:

Nathan: “There was a picture that went viral… it’s of you wearing a baseball cap, a grey hoodie and you’re holding a SuperValu bag (“I should say you’re wearing trousers as well!). Everyone on Twitter wanted to know, what was inside that SuperValu bag?”

Matt Damon: “Oh actually, that bag I think we just had the towels, I was with the kids, we were taking a dip in that water there and so we had towels to dry off with so I think we just grabbed one of our SuperValu bags and stuffed it with stuff because we didn’t show up with beach bags so we were just improvising”

Nathan: “See everyone in Ireland thought you were going to the craziest session ever…”

Graham: “Usually people carry their cans in their plastic bags, and they go to massive house parties”

Matt Damon: “To be fair, I’m sure there were cans in there originally, we just had to take ‘em out to put the beach towels in…”

Graham and Nathan also took the opportunity to surprise one Matt Damon superfan. Anais Manierè, a nurse from France who is currently working on the frontline in Dublin, got to meet her idol virtually and he thanked her for everything she is doing: “Thank you so much for what you’re doing. I can’t even tell you; this has been so horrible for everybody but if there’s any silver lining it’s that hopefully people are finally understanding how awesome you Frontline workers are and what you guys do and this debt we owe you guys. I feel like that is the one thing to come out of this, we will never ever ever look at you guys the same, and that’s a good thing, aw man it’s really nice to meet you”

ON THE COVID CRISIS IN AMERICA:

“We’re a little worried about going home but we’re watching on the news, but it looks like they’re re-opening. We don’t have adequate testing so there’s going to be another surge it looks like back home. There’s all these areas in America that it hadn’t really penetrated and now, y’know…”

ON RETURNING TO IRELAND POST-COVID:

“I’m coming back anyway, whenever the world right itself and we’re allowed o back to work, we still have this movie to make so. I’ve got 8 weeks of shooting to look forward to so I have at least a few more months here. Who knows what the world is going to look like? This would not be a bad place to wind up though, we’re really loving it”

You can listen back to the interview in full on SPIN1038.COM or via the SPIN app.

Fully Charged with Graham and Nathan: Weekdays 7-10am on SPIN 1038.