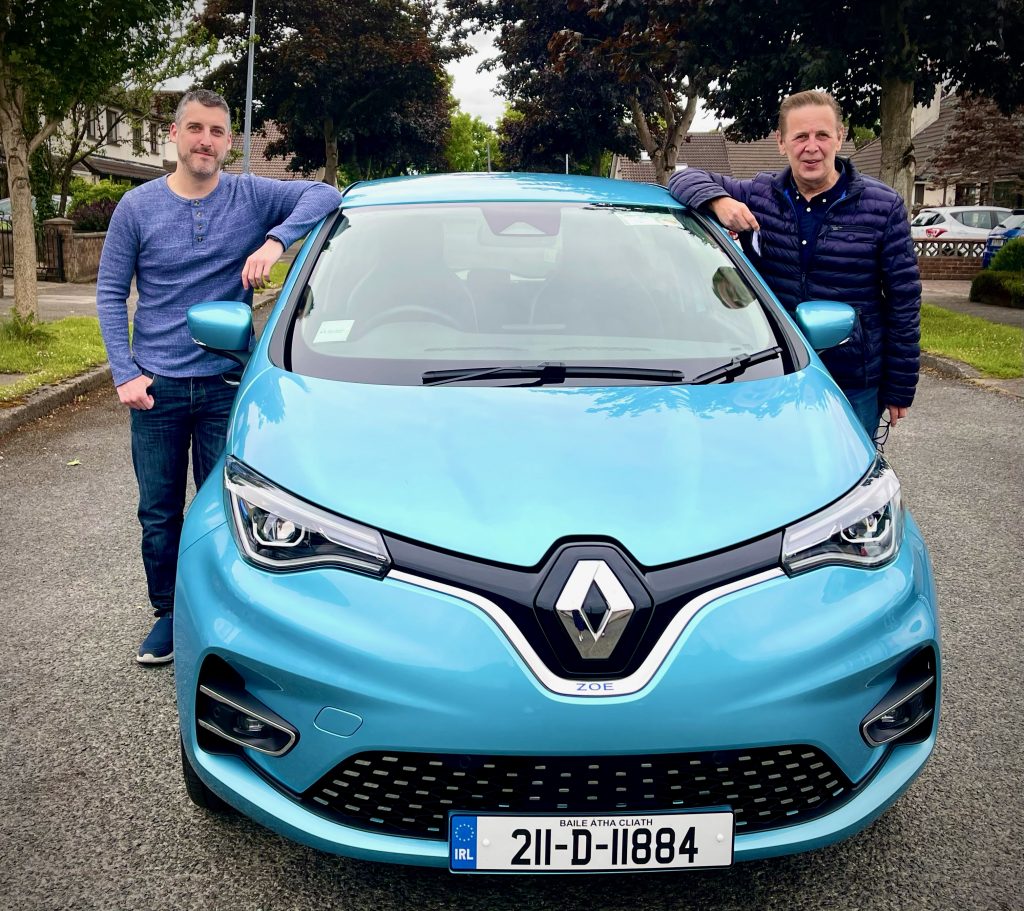 Friday, 25th June: This morning, The Ian Dempsey Breakfast Show on Today FM (7-9am) gave away a brand-new car worth €29,000 to one lucky listener alongside their show sponsor, Renault.

Parents of three, Kevin Bolton and his wife from Dublin were left stunned this morning as Ian Dempsey personally delivered a brand-new Renault Zoe E-tech 100% Electric to their house after a nail-biting on-air competition came to an end.

Over a two-week period The Ian Dempsey Breakfast Show celebrated 10 years of Sponsorship alongside Renault by giving away a brand-new car. Within days of the competition launching, thousands of people around Ireland entered to win the brand-new electric car.

A total of ten contestants were chosen to come on-air so that they could go head-to-head for their chance to win.

Today FM listeners got to hear from some great characters along the way such as Shane McGuinness from Donegal who printed his own very own t-shirts for the competition! In the end, the show was left with 2 finalists, Kevin Bolton from Dublin, and Meath native, Claire Lynch.

In their last hurdle, finalists were given one question whereby the closest answer would win the car.

The question was ‘How many babies were born in Ireland last year named Zoe’? The answer was 125 making Kevin the winner with his answer of 130.

Speaking about his win, Kevin said, “I’m still shaking, we were working together all week to try and figure out what the winning question would be. We really did our homework. We can’t believe we’ve won!”

While Ian Dempsey commented, “Well, isn’t that an exciting end to the first half of 2021? I think we all needed it too. It was great to give away a brand-new car on the radio. We got thousands of texts from our listeners but in the end, Kevin came on top. I’m delighted for him. Thanks to everyone who had a go. You never know what we’ll have next for the morning listeners of Ireland – it all happens here!”

Liz O’Gorman, Marketing Manager at Renault Ireland added, “Renault Ireland were delighted to mark our 10-year anniversary as sponsors of The Ian Dempsey Breakfast Show by giving away a brand-new Renault Zoe E-Tech 100% Electric, the best-selling electric car in Europe. We enjoyed following the competition and looking back at some of the best parts of the breakfast show over the last 10 years. We would like to congratulate Kevin on winning and wish him many happy kilometres of fully electric driving in his brand-new Renault Zoe E-Tech 100% Electric.”

Watch the moment Ian Dempsey hands over the keys – It all Happens HERE.