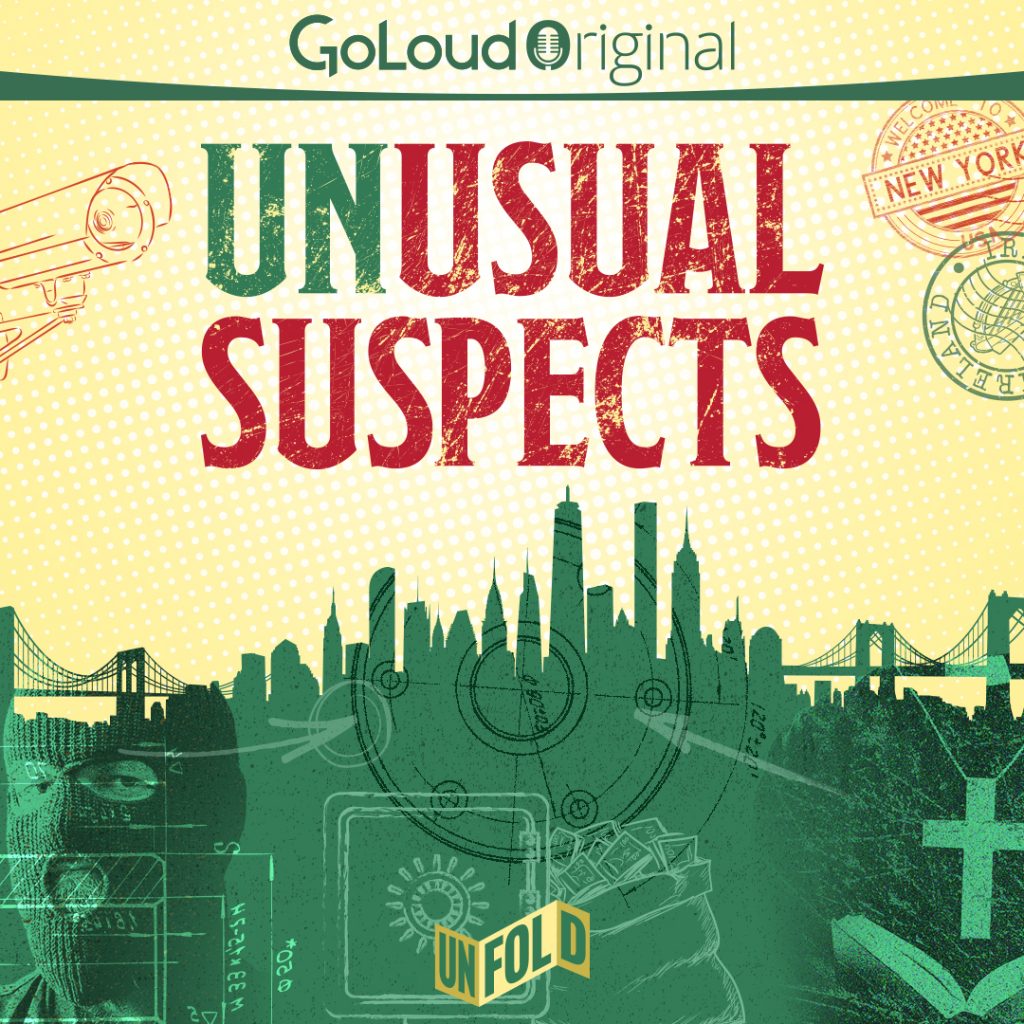 LISTEN TO EPISODE ONE NOW

Unusual Suspects tells the remarkable true story of the 1993 Rochester Brinks heist, when $7.4m was stolen by armed raiders, and the ensuing FBI investigation, which saw police chasing the most unlikely trio of suspected thieves that included an Irish priest working in Manhattan, a former IRA man turned comic book dealer, and a former New York police officer.

This story took writer and producer Brennan on a journey from Belfast to New York, as he sought to unravel the incredible true story behind one of the most audacious heists in US history, the robbery from an armed Brinks vault in 1993, which at the time was the fifth largest in US history, and the fascinating cast of characters drawn into the mystery as the investigation unfolded. Among the unusual suspects Brennan encounters on his travels are two Irish men implicated in this barely believable crime, including an Irish priest, and a former IRA H-Block Prisoner turned comic book dealer.

Over the course of seven episodes, using a wealth of original interviews and a rich soundscape, Unusual Suspects takes listeners from the night of the heist, inside the FBI investigation and the ensuing trial, and the aftermath. The story also delves into the personal, and intriguing, lives of the two central characters – Father Pat Moloney and Sam Millar.

Episode by episode Brennan unravels the tall tales, side stories and dead ends, bringing listeners on a journey from the barbaric Belfast prison, where former IRA man, Sam Millar served time and was involved in the no wash blanket protests, before escaping to America to set up a comic book shop, to inside the parish of Father Pat, the Limerick born priest caught up in the heist.

Unusual Suspects is the first release in GoLoud’s new multi series narrative brand ‘Unfold’. This new strand of podcasts and digital audio products will bring listeners a range of fascinating true tales from Ireland and around the world. The first three episodes of Unusual Suspects were released today, and are available on the GoLoud app and all major podcast platforms, with new episodes coming weekly on Wednesdays.

“Unusual Suspects is the culmination of many months of hard work on production, recording and sound scaping. Beyond that Eoin Brennan has spent years following this story and charting every twist and turn. Unusual Suspects is GoLoud’s first foray into immersive audio experiences like West Cork and Serial, we’re proud of what we’ve produced, this series stands up alongside the very best. Unusual Suspects reinforces our commitment to quality narrative and world building, rich sound design, and stories so fast paced and gripping it’s hard to believe they’re true.

“Unusual Suspects is the ideal title to add to our slate of GoLoud Original Podcasts. Having produced some of the leading episodic podcast series in the market we’re very excited to bring our first narrative box-set to an audience who’ve demonstrated an appetite for quality digital audio content.  GoLoud is thrilled to offer true crime fans a completely immersive audio experience.”

“I’m very excited for Unusual Suspects to be released, a lot of work has gone into it from the GoLoud team and I’m hopeful audiences will find the story of the 1993 Rochester Brinks heist, and the eclectic cast of characters around it, a gripping listen.

At first glance the Brinks story is a fascinating one, but it gets even more intriguing as you meet the people involved. There’s a lot of layers to the story and a multi-episode series allowed us the space to explore the story in the depth it needed.

This release marks a significant moment in the evolution of GoLoud as we make our entry into the world of narrative podcast series, and I’m confident our audience will enjoy this immersive, fascinating story.”

Unusual Suspects, a GoLoud Original Podcast launched today, 23 February. Episode 1 is available now on the GoLoud app and on goloudnow.com.

Eoin Brennan is an award-winning documentary maker and producer of some of Ireland’s most popular podcasts.  A former producer on Newstalk’s flagship Pat Kenny show, Brennan currently serves as the lead podcast producer at Go Loud, his work has won awards internationally and in Ireland, across documentary, drama and current affairs.

His 2018 series ‘After Tuskar Rock’ won a gold and silver award at the New York Radio Festival, which honours the best radio productions from around the world, and was also shortlisted in the Documentary category at the IMRO awards. A drama which Brennan produced, ‘Searching for Daddly Dee’, won gold at the IMRO awards (2019). Eoin also produced and wrote ‘Never Ignored: Ollie’s Reds’ (2014) – winner at the NYF and nominated at Celtic Media Awards.

LOVE IS ON THE AIR! THOUSANDS MORE LISTENERS ARE FALLING FOR TODAY FM!