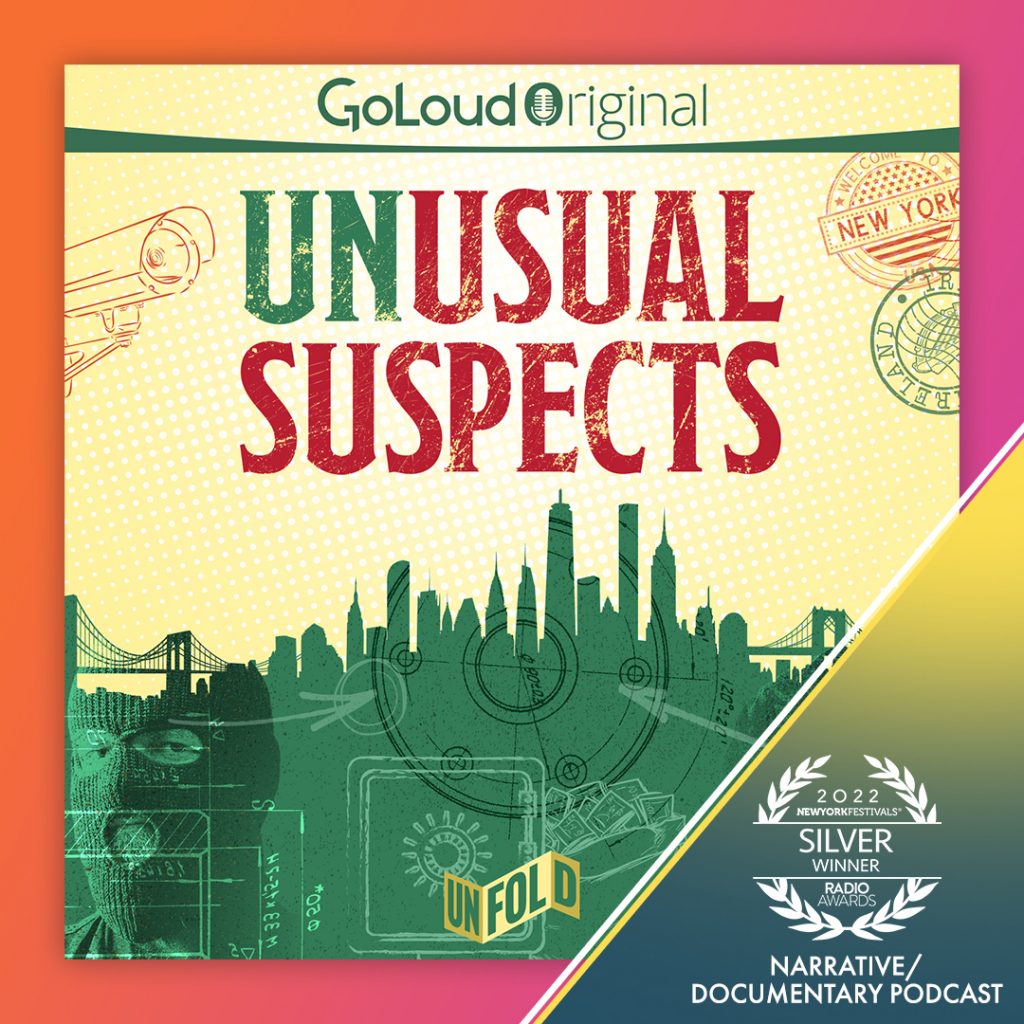 GoLoud, Ireland’s home of podcasts, is delighted to be celebrating winning an award for Best Narrative/Documentary Podcast at the New York Festivals® Radio Awards for the critically acclaimed Unusual Suspects, a GoLoud Original podcast produced by Eoin Brennan.

The series which has topped the Irish podcast charts, took away one of the top prizes at the prestigious New York Festivals® Radio Awards for the seven-part podcast which explores the remarkable true story of the 1993 Rochester Brinks heist. The story begins when $7.4m is stolen by armed raiders, and Brennan charts the ensuing FBI investigation, which saw police chasing the most unlikely trio of suspected thieves that included an Irish priest working in Manhattan, a former IRA man turned comic book dealer, and a former New York police officer.

Unusual Suspects was nominated in three categories in total at the annual awards, which recognise excellence in the audio world for both radio and podcasts. The series was a finalist in the Best Nonfiction Series category and the Serialized Podcast category before claiming the silver prize for best podcast in the Narrative/Documentary category.

This story took writer and producer Brennan on a journey from Belfast to New York, as he sought to unravel the incredible true story behind one of the most audacious heists in US history, the robbery from an armed Brinks vault in 1993, and the fascinating cast of characters drawn into the mystery as the investigation unfolded. Among the unusual suspects Brennan encounters on his travels are two Irish men implicated in this barely believable crime, including an Irish priest, and a former IRA H-Block Prisoner turned comic book dealer.

Over the course of seven episodes, using a wealth of original interviews and a rich soundscape, Unusual Suspects takes listeners from the night of the heist, inside the FBI investigation and the ensuing trial, and the aftermath. The story also delves into the personal, and intriguing, lives of the two central characters – Father Pat Moloney and Sam Millar. The podcast is written and presented by Eoin Brennan, Lochlainn Harte was the sound designer, with production assistance from Siobhan Walsh.

Unusual Suspects is the first of GoLoud’s new multi series narrative brand ‘Unfold’. This new strand of podcasts and digital audio products will bring listeners a range of fascinating true tales from Ireland and around the world.

“I am delighted that our series has been given this award by the judges at the New York Festival. It’s a huge honour to have Unusual Suspects recognised alongside the best in the radio and podcasting world. This series our first step into the world of narrative podcasting at GoLoud and the response from audiences to this fascinating story has been fantastic.”

“We’re incredibly proud of the success of Unusual Suspects, the response from audiences has been remarkable. It’s shown the clear demand for quality content. To claim one of the top prizes at The New York Festivals® Radio Awards is a big milestone for GoLoud, to stand among some of the top publishers on the planet, like BBC, CBS, NBC, CBC, Wondery, and NPR, it’s deserved recognition for Eoin’s incredible work. It marks the culmination of a journey that began many years ago when Eoin Brennan first began following this story when he travelled to New York to meet Father Pat and the other key players in this story, it is fitting that it is in New York that the quality of the podcast is recognised on the global stage with this award.”

Eoin Brennan is an award-winning documentary maker and producer of some of Ireland’s most popular podcasts.  A former producer on Newstalk’s flagship Pat Kenny show, Brennan currently serves as the lead podcast producer at Go Loud, his work has won awards internationally and in Ireland, across documentary, drama and current affairs.

His 2018 series ‘After Tuskar Rock’ won a gold and silver award at the New York Radio Festival, which honours the best radio productions from around the world, and was also shortlisted in the Documentary category at the IMRO awards. A drama which Brennan produced, ‘Searching for Daddly Dee’, won gold at the IMRO awards (2019). Eoin also produced and wrote ‘Never Ignored: Ollie’s Reds’ (2014) – winner at the NYF and nominated at Celtic Media Awards.